Courage for the Morning: Overcoming Obstacles to Songwriting with Anya Hinkle 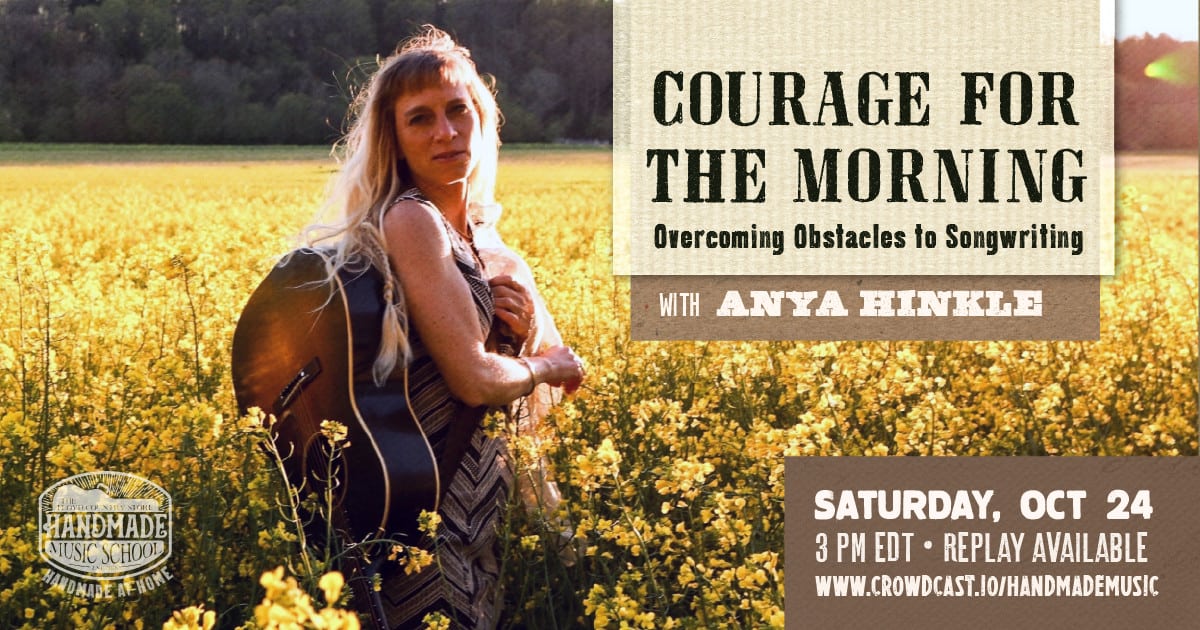 Courage for the Morning: Overcoming Obstacles to Songwriting with Anya Hinkle

The Handmade Music School presents Courage for the Morning: Overcoming Obstacles to Songwriting with Anya Hinkle on Saturday, October 24, 2020 at 3:00pm EDT. The workshop will be presented via Crowdcast as part of our Handmade at Home online series. Cost is $1 to $100 (suggested donation of $15).

Singer-songwriter Anya Hinkle will explore the tools songwriters use to mine a song out of the human experience. The hour-long discussion, including performances of her song “Courage for the Morning” and others from her catalogue to illustrate examples, will help inspire and encourage you to overcome fear and overwhelm to write YOUR song. Tools she will talk about include:

Anya Hinkle explores the beauty of song craft with vivid storytelling, vibrant musicianship and arresting honesty, steeped in the tones of folk and bluegrass and seasoned by travels across the world. While she has ten albums under her belt with collaborations with bands Dehlia Low, Tellico and others, she is currently working on her first full-length album under her own name on Organic Records, to be released in 2021.

Originally from Blacksburg, VA, her musical influences are tied closely with the Floyd Store—she got her start at the jam outside the store where she met musician and luthier Jackson Cunningham. The pair recorded their first album “Old Time Duets” as part of the The Crooked Road series. Says Hinkle, “at that time, I was not a songwriter, I just wanted to study old time and bluegrass music and the vocal and instrumental styles of both.”

After moving to Asheville, NC, she began writing songs for her band Dehlia Low (Rebel Records). “I knew we needed material for our band, and I always loved writing, so I started tinkering around with writing lyrics to melodies that were in the tradition, that worked well with the kind of music I had been playing up to that point. I never felt like a songwriter until quite recently, when realized that it’s one of the things I enjoy the most about making music—the magic of creating a song that captures something of you but resonates with others as well.”

Hinkle won the Merlefest Chris Austin Songwriting Competition in 2019 and was a finalist in the 2019 Hazel Dickens Song Contest for her song “The Ballad of Zona Abston.” Tellico’s 2018 album Woven Waters, produced by Irish guitar legend John Doyle (Transatlantic Sessions, Joan Baez, Tim O’Brien) and out on Organic Records had a #1 single for “Courage for the Morning” on the Folk DJ charts in November 2018.

Tour highlights in 2019 include tours in Japan and France and performances at MerleFest, La Roche Bluegrass Festival (Europe’s largest), Albino Skunk, the North Carolina Folk Festival; Anya and her band Tellico were official showcase artists at the conference of the International Bluegrass Music Association conference and also performed at the Floyd Country Store!