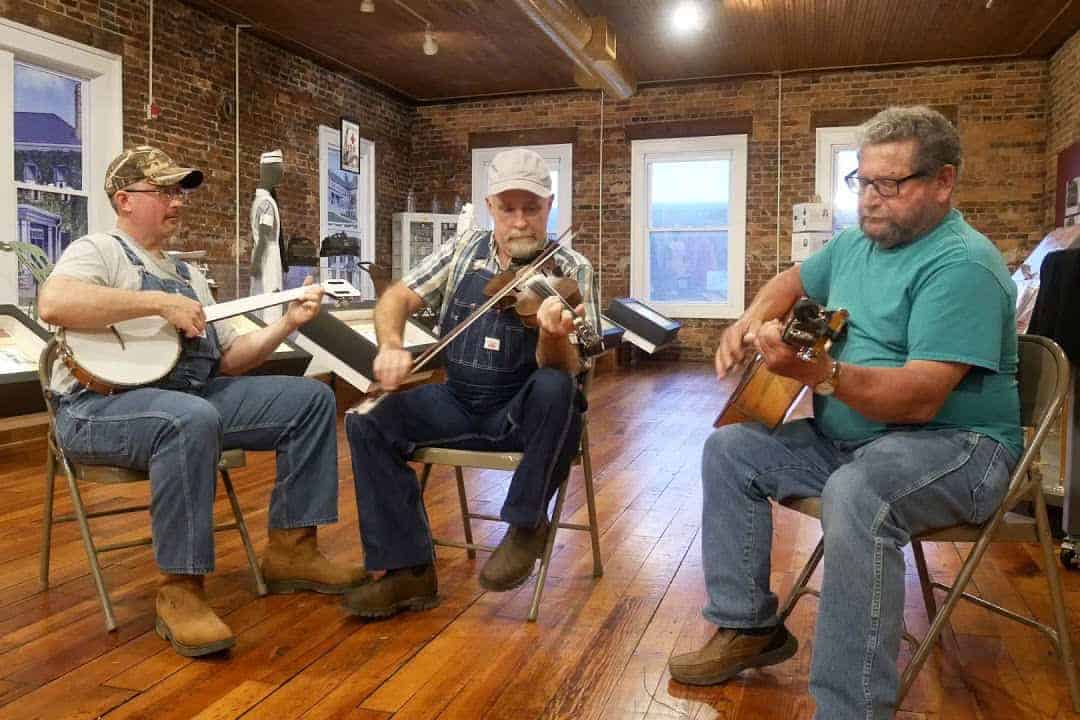 The Handmade Music School presents an intermediate/advanced Round Peak workshop on Saturday, December 21, 2019 from 3:30 – 5:00 pm. The workshop includes your choice of fiddle with Kirk Sutphin, banjo with Kevin Fore, or guitar with Chester McMillian. Cost is $30 for one workshop.

Kirk Sutphin grew up in Walkertown, North Carolina, heavily exposed to traditional music of the region from the Round Peak fiddle styles of Surry County to the banjo picking of Charlie Poole. Throughout his life, Kirk has made an effort to visit with countless older musicians of the area. He has learned tunes from many musicians born around the turn of the 20th century. Kirk is an exceptional fiddler whose sound is often compared to that of Tommy Jarrell. He is also an excellent banjo player in both clawhammer and finger-picking styles.

Kirk’s grandfather was a fiddler who often played for local square dances with Tommy Jarrell. His grandmother loved to dance, and she told him many stories about growing up in an area that was rich in music and dance. Kirk’s father was a Charlie Poole fan, and his interest was contagious. He and Kirk played a lot of music together that included most of Charlie Poole’s recorded repertoire. Kirk not only collected recordings of Charlie Poole, he also sought out musicians who played with Poole, such as Lonnie Austin and Kinney Rorrer, in order to learn from them first hand.

Kirk spent many hours playing music with Tommy Jarrell, learning his fiddle style. Tommy reportedly said that Kirk captured the nuance of his fiddling more than anyone. Kirk has sought out numerous older musicians of the region, both in person and on recordings. He has a sizeable collection of commercial 78 rpm disks as well as home recordings of local and regional mountain musicians.

Kirk has helped teach other musicians from the area by sharing playing techniques and also his vast music collection. He has taught at music camps, from the Swannanoa Gathering and Mars Hill’s Blue-Ridge Old Time Music Week in North Carolina, to the Old-Time Music Week at the Augusta Heritage Center in West Virginia. Kirk continues to be a proponent of western North Carolina mountain music through performances with numerous musicians in the area. He has made a number of recordings, which are available from his website.

Kevin Fore grew up in the Beulah/Lowgap area of Surry County. He plays Round Peak style clawhammer banjo and is one of the youngest native tradition bearers of the style. Kevin took an interest in the traditional music of his community after he graduated high school and a doctor advised him against his hobby of racing cars on a dirt track. “I’m allergic to dust,” explains Kevin, “so I started going to square dances where Benton Flippen was playing.”

He wanted to play the banjo, and he sought out traditional musicians in his community as teachers. He visited his cousin Verlen Clifton of the Camp Creek Boys fame to learn banjo tunes and made trips to fiddler Benton Flippen’s house to hear him play. When he met Kirk Sutphin at a dance where he was playing with Benton, he discovered family ties. “He’s my double cousin,” says Kevin. Kirk gave Kevin copies of home recordings of Tommy Jarrell, Fred Cockerham, Kyle Creed, and other local traditional musicians. Soon, Kevin was playing banjo behind Kirk’s fiddle. “That’s how I’ve learned the biggest part of my music,” Kevin says, “off home recordings and going to Kirk’s.”

The more Kevin learned about the vibrant Round Peak music tradition, the more he discovered about his own family ties to the music. According to another cousin Paul Sutphin, another member of the legendary Camp Creek Boys, one of Kevin’s great-great-grandfathers was a master banjo picker in Round Peak, and his great-grandfather also played the banjo in Round Peak. He is distantly related to Sadie and Lilly Scott, who played with Tommy Jarrell.

Kevin has won numerous awards for his banjo playing through the years and since 2007 he started building banjos in the style of Kyle Creed’s banjos. Some folks have told Kevin he has picked up where Kyle left off.

Kevin most often plays with his own band The Round Peak Boys featuring Kirk Sutphin on fiddle and his other band he joined up in several years ago, Southern Pride, a Galax-based band that has been around for more than a decade and includes Joey and James Burris and Terry Semones. They have many first place winnings at the local fiddlers conventions including the Galax Fiddlers’ Convention.

Chester McMillian was born in Carroll County, Virginia, into a musical family and community. He has played traditional oldtime Round Peak style music since childhood. By the time he was eleven or twelve years old, he was living in Surry County and taking an active part in the Round Peak music community. He has played with Dix Freeman, Tommy Jarrell, Greg Hooven, and with his own group Backstep that today includes his son, Nick.

“I had music on both sides of my family,” says Chester. His father was an oldtime banjo player, and his mother’s brothers played fiddle. Chester remembers going to house dances and listening to his father and uncle play. When he was young, his father helped him make an instrument out of a cigar box. He and his brother soon acquired a mandolin and guitar, and they started playing music together.

Chester played mandolin and a little fiddle, but he eventually settled into the guitar as his main instrument. In 1962, Chester married into Dix Freeman’s family, and the two began playing a lot of music together. “Each community had their own musicians back then,” he says, adding that most musicians therefore had individual styles. Chester played guitar with finger picks on his thumb, index, and middle fingers. He worked as an auto mechanic and smashed his finger on the same day he had to play a square dance with Whit Sizemore. His middle finger hurt to up-pick, so he turned the pick around and began strumming down with his middle finger. “It’s a style that nobody else plays like,” he says.

Chester played guitar with Tommy Jarrell for fifteen years, and he developed his guitar style specifically to play with Tommy. “You just didn’t strum the guitar behind Tommy,” he explains. “I had to develop to play notes behind the fiddle and banjo.” He accompanied Tommy on numerous trips to local and national events, including trips to Washington, D.C., to perform for festivals. Chester recorded albums with Tommy, and he plays with Tommy on parts of three documentary films produced by Les Blank, Sprout Wings and Fly, Julie, and Tommy’s Fiddle.

Chester helped start the band Backstep with Greg Hooven, and Bill Mansfield. Today, he continues to perform with his son, Nick, an accomplished musician who plays numerous instruments in numerous styles. Chester has also kept busy teaching music to children in Surry County. He teaches guitar, fiddle, banjo, and mandolin beginning with the church melodies that they already know. “I teach them to play gospel,” he says, “Then they can learn what they want afterwards.” When asked what he likes, Chester says, “I enjoy all kinds of music, but I like to play the Round Peak style of oldtime music.”