Fretless Banjo: Techniques to Make Your Playing Stand Out with Nora Brown 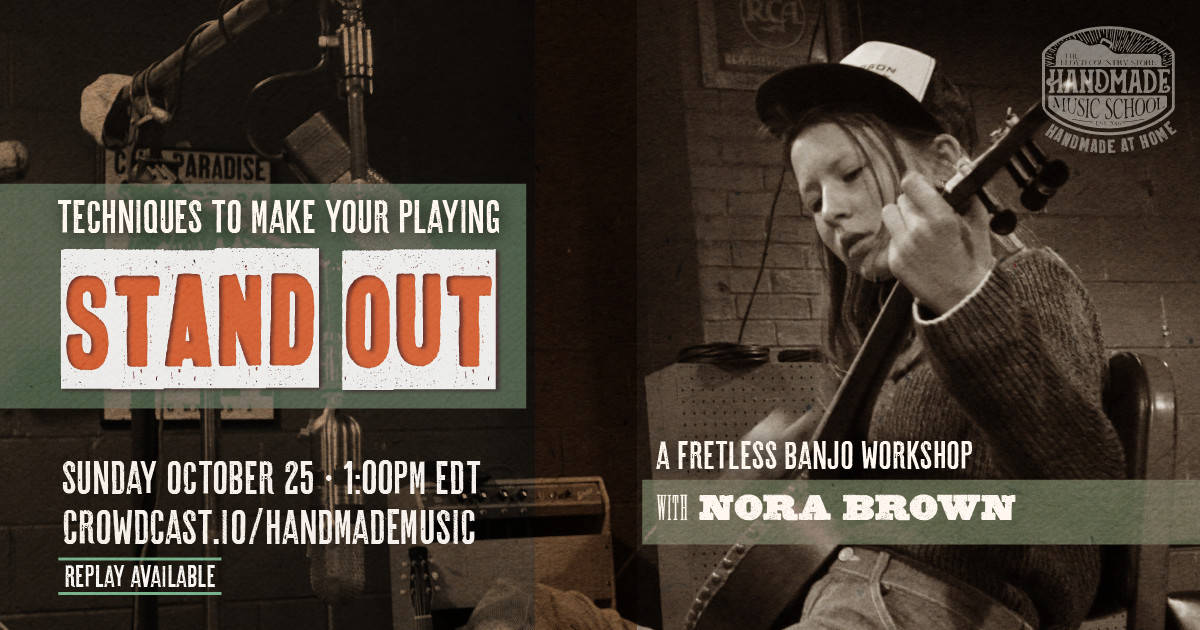 Fretless Banjo: Techniques to Make Your Playing Stand Out with Nora Brown

The Handmade Music School presents Fretless Banjo: Techniques to Make Your Playing Stand Out with Nora Brown on Sunday, October 25, 2020 at 1:00pm EDT. The workshop will be presented via Crowdcast as part of our Handmade at Home online series. Cost is $1 to $100 (suggested donation of $15).

Have you been playing fretless banjo for while and are interested in learning some some more mid level/advanced tunes? In this class we will learn fun techniques for the fretless banjo, through one of my favorite tunes- Po’ Black Sheep. This class will be especially helpful to those who attended my last fretless banjo class, but if you didn’t, no worries!! I will touch on some of the things we talked about in the last class. Po’ Black sheep is a great fiddle-banjo duo, and many elements of the tune like slides and syncopation are perfect for a fretless banjo style. The particular version I will be drawing from is by Fraiser and Patterson, an old fiddle-banjo duo, although contemporary bands like The Carolina Chocolate Drops have recorded it too. Bring a fretless banjo of any kind- nylon or metal strings, I will be teaching through both.

In this class you will learn the techniques of the fretless, nylon/gut string banjo. Throughout the class we will be mastering syncopation, rhythm and learning to use the fretless banjo to its fullest extent. After we learn some of these techniques, we will Incorporate them into a tune. There is so much to explore with the fretless banjo!

Nora Brown started learning music at the age of 6 from the late Shlomo Pestcoe. From his studio apartment in Brooklyn, Pestcoe instilled in her the belief that music is meant to be shared. Nora plays old-time traditional music with a particular interest in eastern Kentucky and Tennessee banjo playing. Along with the banjo she’s interested in techniques of unaccompanied ballads form the Southeast region of the United
States.

In October 2019 Jalopy Records released Nora’s first album of 11 traditional
songs and tunes called Cinnamon Tree. It was produced by the legendary Alice Gerrard and pressed by Third Man Pressing in Detroit. It’s only available on limited edition vinyl with a digital download and liner notes. Cinnamon Tree landed #7 on the Billboard Bluegrass Charts the 2nd week of its release.