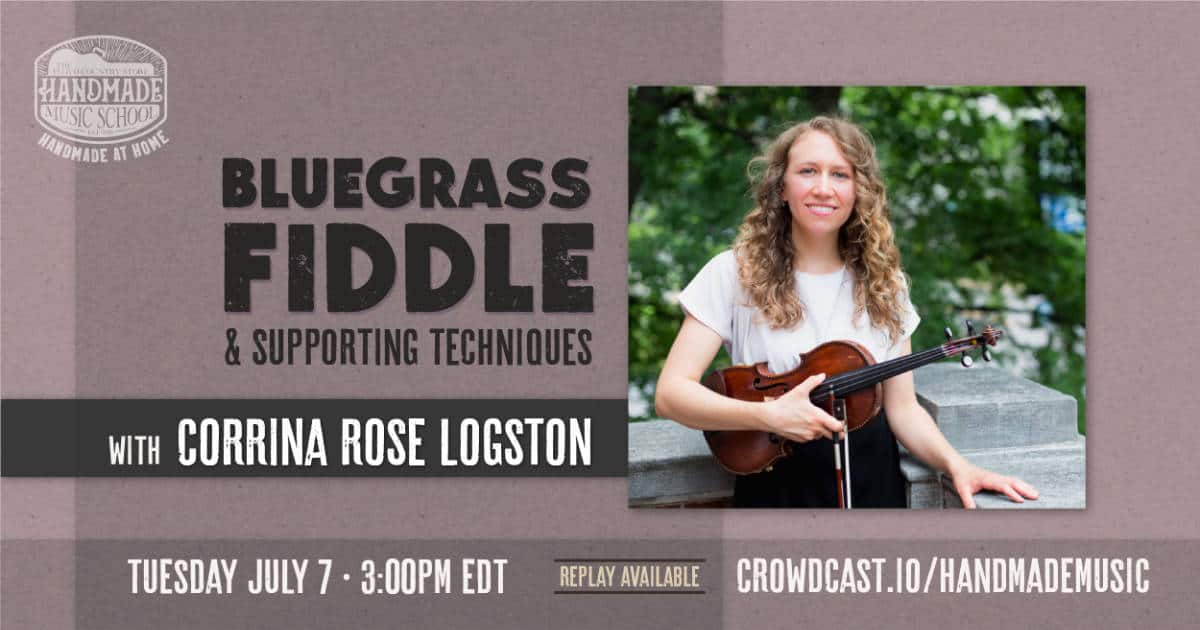 The Handmade Music School presents Bluegrass Fiddle and Supporting Techniques with Corrina Rose Logston on Tuesday, July 7, 2020 at 3:00pm EDT. The workshop will be presented via Crowdcast as part of our Handmade at Home online series. Cost is $1 to $100 (suggested donation of $15).

This class will explore fiddling specifically as it pertains to bluegrass, discussing the sounds and styles of early pioneers, what makes fiddling sound like “bluegrass,” and direct ways to incorporate those elements into your playing. Supporting techniques and exercises with an emphasis on bowing and right hand techniques will be discussed.

Corrina Rose Logston is a fiddler specializing in the bluegrass tradition. She has performed with a who’s who in the bluegrass and traditional music realm, including Jesse McReynolds, Jim Lauderdale, Alison Krauss, Peter Rowan, Charlie Louvin, Del McCoury, Melvin Goins, and Bobby Osborne. She has had the honor of studying with giants in the music like Jim Buchanan and Buddy Spicher.

A southwestern Illinois native who grew up in a bluegrass family, Corrina learned about fiddling both from her parents’ extensive record collection and the rich traditions of local regional fiddlers. In 2008, she moved to Nashville, Tennessee, to attend Belmont University and graduated in 2012 with a double major in Music Business and Artist Production. She placed 1st in the Bluegrass Fiddle category at the Galax Old Fiddlers’ Convention in the same year. In 2014, Corrina helped found the young up-and-coming bluegrass group High Fidelity, and shortly after, the band won the SPBGMA International Band Championship. The group has released several critically-acclaimed albums and in 2019 was nominated for the IBMA’s New Artist of the Year award.

Corrina currently resides in Nashville, Tennessee, performing regularly both with High Fidelity and on the Grand Ole Opry with Jesse McReynolds and the Virginia Boys. She also freelances as a touring performer and studio musician.