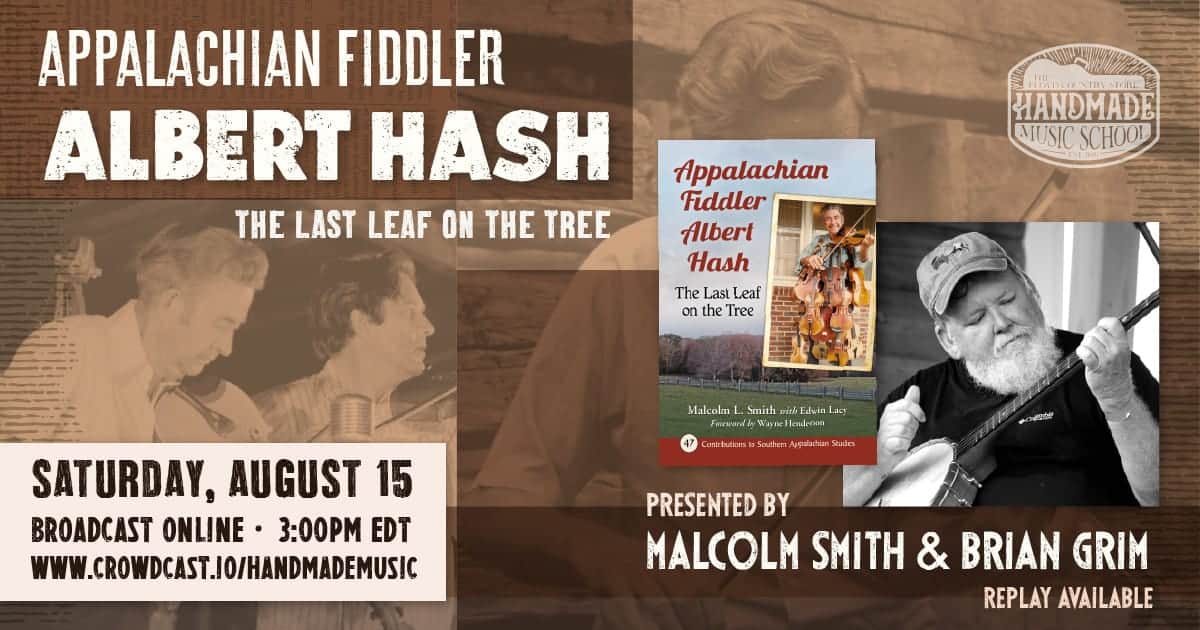 The Handmade Music School presents Appalachian Fiddler Albert Hash: The Last Leaf on the Tree featuring Author Malcolm Smith and Fiddler Brian Grim on Saturday, August 15, 2020 at 3:00pm EDT. The workshop will be presented via Crowdcast as part of our Handmade at Home online series. Cost is $1 to $100 (suggested donation of $15).

Appalachian Fiddler Albert Hash: The Last Leaf on the Tree: Guitar building legend Wayne Henderson credits his entire career to the mentorship of Albert Hash. “He was a true folk hero,” says Henderson in the foreword to the new Albert Hash biography. Born and raised near Whitetop Mountain in extreme poverty, Hash rose to become one of the premiere old time fiddlers in the world with the Whitetop Mountain Band, while also building hundreds of much sought after fiddles in his shop on Virginia’s second highest Peak. In this workshop, Dr. Malcolm Smith, the Author of Hash’s biography, will share stories and memories that he learned in over 100 hours of interviews conducted while researching Albert. Brian Grim will demonstrate Albert’s unique bowing style and play some of Albert’s versions of tunes like “Hangman’s Reel.”

Dr. Malcolm Smith is a writer and banjo player who specializes in writing about old time musicians. Besides writing the biography of Albert Hash, he has written countless stories for The Old Time Herald, SingOut! and other magazines. He has written recent features on banjo builder Mac Traynham, 90 year old banjoist Rhoda Kemp, Walt Koken and Clare Milner and many other musicans.

Brian Grim is an accomplished fiddler from Grayson County Virginia who learned to play the fiddle from Albert Hash at an early age. Brian with his sister Debbie Grim founded the Konarock Critters, one of the most highly accomplished string bands in recent history, touring extensively in the U.S. and Europe. Inspiring a generation of young fiddlers to learn the “Albert Hash” style of fiddling, Brian’s playing has been widely featured, most recently in Mike Seeger’s final documentary “Just Around the Bend.”